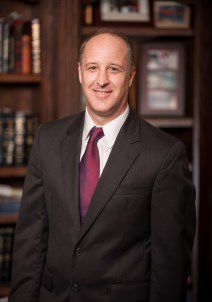 Tyson Daniel is a trial lawyer and founder of The Daniel Law Firm PC - a full service Law Firm with an office in Roanoke, Virginia. Before forming The Daniel Law Firm, Tyson served as Senior Assistant Capital Defender with the Capital Defense Unit for the Western District of Virginia (CDU). As part of the CDU team, Tyson handled numerous Capital Murder (Death Penalty) cases at the Circuit Court (trial Court) level.

Given his experience in handling and litigating those extremely complex cases, Tyson is uniquely qualified to handle any sort of criminal matter that may arise. Tyson’s current practice puts him in numerous Courts on an almost daily basis handling everything from the simplest traffic matters to the most complex felony cases. Tyson’s typical traffic and criminal cases include charges of Reckless Driving, DUI & DUID, Hit & Run, Assault & Battery, Drug Crimes, Larceny, Burglary, Robbery and other serious felony matters. More recently, Tyson was named by his peers as among “Virginia’s Legal Elite” in the area of Criminal Defense practice (Virginia Business Magazine - December 2012 and December 2013).

With respect to civil matters, Tyson counsels clients on issues ranging from quasi-civil University and College Disciplinary Actions – which may, or may not, be associated with a pending criminal charge – to Wrongful Death and Personal Injury Litigation. Additionally, after having started several companies of his own and having raised over $1M in venture capital for one of his “start-ups,” Tyson understands business; and, consequently, Tyson understands the needs of his business clients. Given his personal experience in the business world, Tyson now counsels ‘Start-Ups’ and Entrepreneurs regarding corporate formation, product development, capital financing, sales and marketing, intellectual property protection (including licensing agreements [with and without royalties]), design & production contracts as well as assistance with local, national & international sourcing.

See www.daniellawfirmpc.com for testimonials and comments about Tyson’s work for his clients; but, don’t stop there, also check-out The Daniel Law Firm at the Better Business Bureau: www.bbb.org/western-virginia/Business-Reviews/